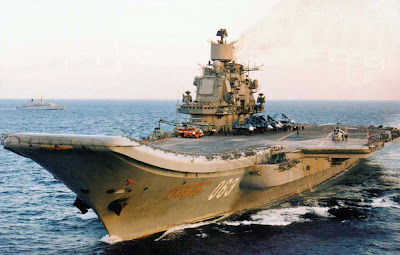 I just love this video about life on Admiral Kuznetsov Class Aircraft Carrier. I think I never watched such beautiful videos – so calm music accompany the live on the aircraft carrier. Such calm and peaceful life on a such powerful military ship.

For our readers who wants to know more about Admiral Kuznetsov Class Aircraft Carrier:

The flight deck area is 14,700m² and aircraft take-off is assisted by a bow ski-jump angled at 12°. The flight deck is equipped with arrester wires. Two starboard lifts carry the aircraft from the hangar to the flight deck.

The ship has a Granit anti-ship missile system equipped with 12 surface-to-surface missile launchers. The Granit missile (Nato codename SS-N-19 Shipwreck) is reported to have a range greater than 400km and is capable of carrying either a nuclear or conventional warhead.

The Klinok air defence missile system, with 24 vertical launchers and 192 missiles, defends the ship against anti-ship missiles, aircraft and surface ships. The system has a multi-channel electronically steered phased array radar and can achieve a firing rate of one missile every three seconds. Four targets can be engaged simultaneously in a 60°×60° sector. The range of the system is 12km to 15km.

Eight systems are fitted, combining missile launcher, 30mm twin gun and radar / optronic director. The range of the laser beam-riding missiles is from 1.5km to 8km. The gun can fire up to 1,000 rounds a minute in the range 0.5km to 1.5km. Six AK630 AD 30mm air defence guns are also fitted.

The ship is equipped with an Udav-1 anti-submarine system with 60 anti-submarine rockets. Udav-1, supplied by the Splav Research and Production Association in Moscow, protects surface ships by diverting and destroying incoming torpedoes.

The system also provides defence against submarines and saboteur systems such as underwater vehicles. The system has ten barrels and is capable of firing 111SG depth charge projectiles, 111SZ mine-laying projectiles and 111SO diverting projectiles. The range of the system is up to 3,000m and the submarine engagement depth is to 600m.