Exhausted by hunger, a wild bear family in Russia’s Far East has taken to highways begging local people for help.

The three bears – evidently a mother and two cubs – were first spotted by a local trunk driver. The man stopped his vehicle to take some rest, when the furry group came by. At first, he was scared stiff, but then realized the animals were not willing to hurt him.

As it turned out, the bears were starving – all the food has disappeared from forests after intense cold hit in the region. 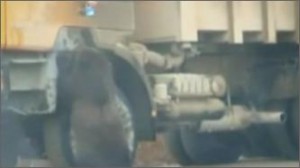 In about half an hour, curious locals gathered on the highway to watch the bear family enjoying their meal. The animals demonstrated a particular liking to condensed milk and soda, so people were going back and forth with new cans and bottles.

The spectators, however, warned each other not to come too close, as a single hit from a bear’s big paw can easily be fatal for a human.

Although there have always been plenty of bears in the region, they rarely come out of the forests. Hunters say it is a bad idea to feed them, as the animals could get used to people’s help and forget how to hunt. In addition, as nice as they can be, the bears will always remain aggressive, thus posing a danger.