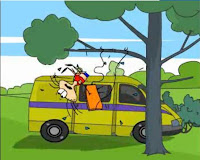 Masyanya was invented by Oleg Kuvaev (Олег Куваев) Russian artist, designer and animator. He started his flash-animation series in 2001. First these series were just sent by email from friends to friends, and when they were used in one of Russian TV shows Masyanya became really popular.

It took time for me to understand who is Masyanya – I even could not understand is it he or she… Now I know and tell you that Masyanya is a girl about 25 years old.. she is quite optimistic and quite cynic. Personally I like optimism and dislike cynicism so Masyanya is not my favorite personage… This Masyanya‘s cartoon is just optimistic (almost like Tom and Jerry… lol). And I publish it just for you to get known Russian Masyanya:

For our readers who wants to know more about Masyanya: