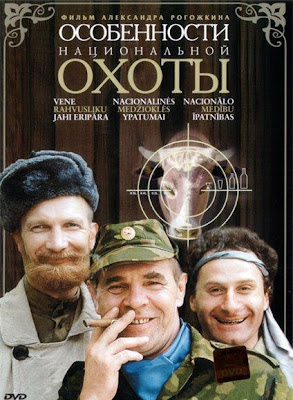 Peculiarities of the National Hunt (Особенности национальной охоты в осенний период) is a bright comedy of modern time (1995).
Finn Raivo studies Russian habits and writes a book about Russian hunting traditions. He comes to Russian and to look at the hunting traditions closely joins a group of Russian men (Army general, a police detective, a local forest ranger (a devotee of Zen Buddhism) and some big-city types from St. Petersburg) who is going to hunt. And the comedy starts: You’ll see all stereotypes about Russia bears, bathhouse (sauna) and vodka, that will be too much, but if you have been in Russia you will think there is something from reality in this comedy or at least it could be or it could happened.