Rescuers say there are more than 100 bodies, including 30 children, inside the “Bulgaria” cruiser boat which sank in the Volga River near the Russian city of Kazan, but the search for survivors continues. Twelve people have been confirmed dead.

­The President of Tatarstan Rustam Minnikhanov has announced that there were 196 people aboard the cruiser which sank on Sunday, including 15 unregistered passengers, Interfax reported. Russia’s Emergencies Ministry has published a full list on its website of those who were on the vessel.

According to the list there are 80 rescued passengers and crew members.

The ship sank at a depth of 20 meters, about three kilometers away from the shore. Divers say the ship is tilted to the right and they have been tapping the vessel in the hope of hearing a return signal.

“We knocked on the boat’s hull and waited for an answer,” said the head of the local department of Russia’s Emergencies Ministry, Igor Parshin. “But unfortunately there was nothing. They flashed lights into the cargo holds and restaurants and they saw bodies there.”

Divers are still inspecting the sunken vessel underwater and lifting more bodies. According to preliminary data from the rescuers, there could be 110 bodies inside the vessel, Interfax reported

Tatarstan’s Emergencies Minister Marat Rakhmatullin said a child’s body is among those recovered.

At least 52 of the passengers were under 18 years of age and most of them had reportedly assembled in one room for an event at the moment of the accident.

Marat Rakhmatullin said divers are opening different rooms of the ship, but the children’s room has not been opened yet.

Helicopters and motorboats are at the scene searching for other passengers. Rescuers are searching the shore too. The rescue operation involves over 300 people, including 49 divers and 73 pieces of special equipment. 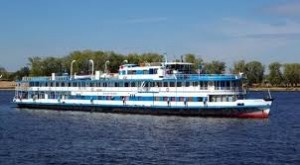 Thirteen islands are situated not far from the scene of the accident. Aircraft have been flying over the islands in an effort to spot any “Bulgaria” survivors who might have made it to shore.

“Your main goal is to survey the shores, divide them into sectors and appoint people responsible for each area,” Russia’s Emergencies Minister Sergey Shoigu instructed the rescuers. “You should check all the 13 islands, and I want to see a final report with conclusions that no people were found there.”

Despite the darkness, rescue divers have worked throughout the night at the site where the “Bulgaria” sank, a source in the Emergencies Ministry stated.

“River islands to which people may have been able to swim to are far from where the boat went down. Strong currents are making the search mission increasingly difficult, because people may have been swept several kilometers away,” local journalist Ilshat Nizamidinov told RT.
­The “pleasure” ship

The two-deck “Bulgaria” belonged to a travel company “Agrorechtur”. The vessel was built in 1955 in former Czechoslovakia.

The ship passed a scheduled examination in the middle of June, and was declared suitable for operation, the Russian Transportation Ministry reported on Monday.

“According to the Russian water transportation register, the MS Bulgaria passed a scheduled examination on June 15, 2011. The ship was found operational in all features,” the ministry stated, according to the Itar-Tass news agency.

According to the director of “Argorechtur”, the “Bulgaria” was in good repair.

“All the repairs were made, it was accepted into the registry, everything was OK,” Svetlana Imyakina, the director, told the Itar-Tass news agency.

According to Imyakinova, the ship fully met the requirements of an economy-class passenger ship, and at the moment it is difficult to ascertain exactly what happened.

However, the Russian online tabloid LifeNews reports the sunken vessel had an engine failure, but the ship’s captain made a decision to leave despite the breakdown in the motor room. The tabloid says one of the crew members told them that several hours before departure the crew found out one of the two engines was not working properly.

“The power of the ship therefore dwindled,” LifeNews quoted the crew member, who requested anonymity, as saying. “If the engine worked properly, the ship would have coped with the current and storm and more likely wouldn’t have tilted,” the source said.

The “Bulgaria” was on a weekend tour from Kazan to Bolgar and sank on its way back to the capitol of the Russian republic of Tatarstan.

The 80-meter-long vessel, with capacity for 233 passengers, was capable of traveling at speeds of up to 21 kilometers per hour.