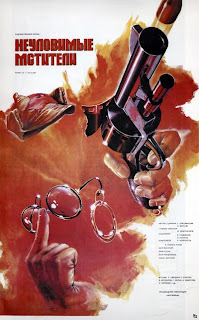 Today we are watching one of the most favorite movies of my Soviet childhood The Elusive Avengers (Неуловимые мстители). The movie was made in 1966 by story of Paul Blyahin (The Red Little Devils).

That is what the author of the novel tells about the story:

“My young friends, readers! The story “The Red Devils” was written by me in the car freight on the road from Kostroma to Baku in 1921. I rode the train for a month instead of usual three days. A Mauser weapon was laying on a table ready to be used.

The Civil war was coming to the end, but bandit gangs continued rubbing trains and food-storages. We had to quite often on alarm take arms and jump out of the car. Trains stopped often: There were not enough fuel for locomotives, and the passengers helped to look for firewood and charcoal.

The country was exhausted by hunger, devastation and disease. But Soviet people patiently endured all hardships and fought heroically with the remnants of intervention and counter-revolution.

Young people, boys and girls and even teenagers together with the older generation fought for Power of Soviet. Hundreds and Thousands of them became volunteers in the Red Army, showing examples of large courage and love for the Motherland.

I often met with such Eaglets in 1920. I heard incredible stories of their courage and dedication.

I wrote my first book about military affairs and adventures of the tree young heroes called “the red little devils”. It was published in Baku in 1922. It was one of the first books about the Civil War, which bloody trail has not yet had time to cool down. Our young readers warmly accepted the book.

Movie director Ivan Perestiani made a movie “The Red Little Devils” by my story in 1923. Soviet viewers, especially youth and children, greeted the film with enthusiasm and immediately responded with hundreds of letters to the commander of the First Cavalry, Budenny to take them to volunteer as “red devils”. Many asked Comrade Budyonny inform them the exact address of this trio. The Red Devil teams were created in some clubs.

At one time, some people accused me that military affairs and adventures of “Red Devils” at times seem impossible and unbearable for such young people (16-17 years old). But twenty years later, during the Great Patriotic War I met again a “little devil” of a new generation, his name was Vasya Bobkov. Vasya was fifteen years old. He wear a soldier uniform and had a machine gun over the shoulder and had a medal of the Red Star on his chest. Vasya Bobkov was an excellent shooter and a brave warrior. He was good in intelligence and also could replace a machine gunner in battle. He has had killed twenty-five Nazis! Well, is this young soldier could not be the fourth little devil in my story? And there were a lot such lads on different fronts of the Patriotic War!

The truth is that the story has some elements of fantasy and exaggeration, but they express the heroic sentiments of our young people who ready to put their life for Communism and happiness of the people.“

Today we are watching a later screen version of “The Red Little Devils” story movie called The Elusive Avengers (Неуловимые мстители) and made by Edmond Keosyan in 1966.

One thought on “Russian Video: The Elusive Avengers (Soviet Movie)!”