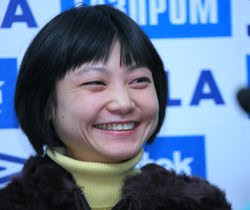 I am not too much in figure skating now… but as all Russians I was in my Soviet childhood. Now time just flies and I am not even able to follow all modern figure skaters. But this story made me think…

The first time I’ve heard about Yuko Kavaguti and Alexander Smirnov when they did not get an Olympic medal for Russia (watch Olympic video). What a strange name and strange look for Russian skater – I thought looking at the pictures of their Olympic program? I wanted to learn more about this cute childish girl with strange name (Yuko Kavaguti), I wanted to see her best videos. Today I show you some but first let me to tell you a story of a Japanese girl who dreamed about Olympics.

Yuko Kavaguti (Kawaguchi) was born November 20, 1981 in Funabashi, Chiba, Japan. She started skating at the age of 5 years old. And as junior in singles skating she won several prizes in Japan. In 1999 she decided to have lessons of figure skating from Russian trainer in USA and came to USA where she lived for several years and won several championships. She became a first Japanese skater who won in pair team.

In 2006 she moves in Russia to continue training with a new partner Alexander Smirnov – Tamara Moskvina (her favorite trainer since 1999) became their couch.

I wish all the best to Yuko Kavaguti – she deserves it.

One of the best videos of Yuko Kavaguti and Alexander Smirnov (music “The Swan” by Camille Saint-Saens).

And I like this Japanese video about Yuko Kavaguti – you can see how they proud of her even she has Russian citizenship now!

For our readers who wants to know more:

Yuko Kavaguti lives in Saint Petersburg, Russia. She bought a 3-room flat (living room, kitchen and bathroom) their. Yuko attended university in Saint Petersburg and studied international politics. His father is a businessman and her mother is a teacher of English tlanguage. Yuko speaks fluently Russian, English an Japanese. She likes to read books in Japanese, solve puzzles, cook and knit, dances and mountain skiing. Youko likes go to Russian museums and watch ballet.