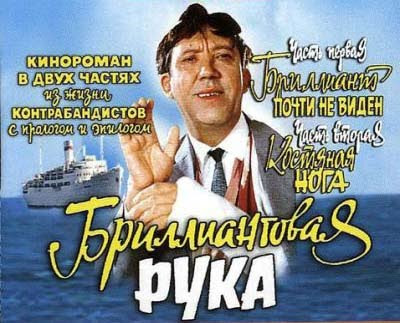 The Diamond Arm was made in 1968, directed by slapstick director Leonid Gaidai and starred several famous Soviet actors, including Yuri Nikulin, Andrei Mironov, Anatoli Papanov, Nonna Mordyukova and Svetlana Svetlichnaya. The Diamond Arm has become a Russian cult film. It was also one of the all-time leaders at the Soviet box office with over 76,700,000 theatre admissions in the Soviet era.

The beginning:
The main character Semen Semenovich Gorbunkov (Yuri Nikulin) is sent abroad on a tourist trip on a cruise ship. During a walk in one eastern city he accidentally slipped and got dislocated arm. But it turns out, when he exclaimed “Damn!” because the word smugglers used as a password. Semen Semenovich lost consciousness and smugglers plastered bandage, packed with gold and diamonds on his arm…

Continue “The Diamond Arm” story we will watch here (with English subtitles):

One thought on “Russian Video: The Diamond Arm (Movie)!”