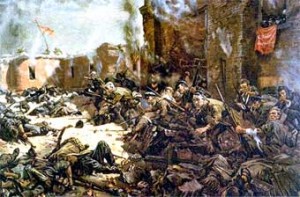 Today we are watching the first movie of “The Unknown War” is TV series. It name is June 22, 1941. The day when Fascist Germany invaded Russia. The front was 1800 miles long. The German planing was particulars. 5000 planes, 6000 guns – the greatest mass artillery what world ever seen. Gitler had said to his generals “When we only kick the door whole rotten construction will fall down” Gitler did not feel necessary to declare the war to Soviet Union before attack had happened. His new tactic was Blitzkrieg… At the end of the first day many board troupes were disappeared and 1200 planes were destroyed.

Watch the video to learn more facts about the first days of The War what we call The Great Patriotic War to find out about Brest Fortress and why now we call it Fortress-Hero.